Last September, while we were celebrating my daughter’s birthday with family and friends, I felt something resembling a cramp in my lower right abdomen.  As the evening went on, the pain worsened and by 11pm I found myself on Google wondering whether I might be having an appendicitis.

I decided on going to the hospital to get myself checked out.  Tough I wasn’t in enough pain to drive, it was distracting enough that I missed my exit.  When I got there just after midnight, the waiting room was pretty full and I started hearing people say they’d been waiting five hours already.  I knew it was going to be a long night when I noticed that people were being called in by the triage nurse, but no one was being seen by the doctor.

About a half-hour after arriving, I was called in by the triage nurse.  As she was checking my pressure and temperature and asking me the routine questions, I ended up telling her that I was 5 weeks postpartum (because she’d asked when my last period was).  She asked if I was breastfeeding and I said yes.

So that’s what I did.  I went home and fell asleep with the help of some acetaminophen.  I woke up early, nursed my baby, pumped a bottle for my husband and made my way back to the hospital.  Once there, I passed in front of the nurses station and made eye contact with the nurse I had seen during the night.  It didn’t take long before she called me in.  Once she took my vitals again and rechecked my pain levels, she told me that everyone that had been before me had left the hospital during the night and that I was the first one on the list and indeed, my name was the first that was called when the new shift started not long after I arrived.

I will forever be grateful for this sweet and thoughtful nurse.  Thanks to her, I was able to have a restful night in my bed rather than an uncomfortable one in a hospital waiting room.  This is not something that she had to do, and because I was admitted, it isn’t even something that she was allowed to do, but she did it nonetheless. 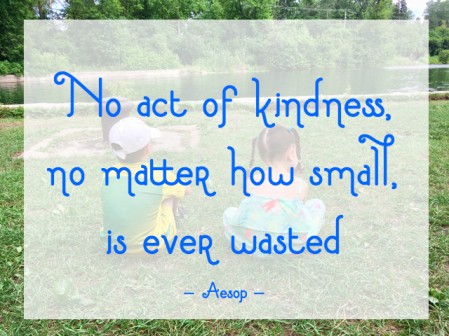 For those of you who are curious, as it turns out, it wasn’t an appendicitis, but rather gallstone attack (that lasted 24 long hours) caused by a rather large stone trying to exit my gallbladder (which is an organ I didn’t even know existed!).  I had a cholecystectomy (my first surgery ever) about a month and a half after my visit to the hospital.

What random act of kindness have you benefited from?

Want to learn more about the April Blogging Challenge?  Check out the original post on Dreaming of Guatemala here.

Published by Sophie @This Outnumbered Mama

Thirty-something year old discovering the joys and bumps of motherhood. View all posts by Sophie @This Outnumbered Mama

This site uses Akismet to reduce spam. Learn how your comment data is processed.